Today is a very special day in video game history, as Super Mario Bros celebrates its 30th birthday. When the game was first released in 1985 it revolutionized the industry, which was in shambles at the time. Revenues were falling and analysts were writing video games off as a fad. The Nintendo Entertainment System and Mario changed this, with a game that was less about hitting high scores and more about adventuring in a new world and unlocking secret levels.

Take a look at the interesting video released this week, where Japanese video game designers Shigeru Miyamoto and Takashi Tezuka discuss their history with Nintendo and the making of the original Super Mario Bros. The tools they used were pretty basic by modern standards. Up to Super Mario Bros 3, all the levels were drawn on graph paper, and then starting with Super Mario World a combination of graph paper plus some editing tools on the PC were used.

To design a course, the game designers would always think like the players and how they would strategize their way through the course. By simulating what the players would do when they entered the game, they constructed the first level, making sure that it was clear to the player what Mario was supposed to do.

The small Mario came about when the team were looking for a way to make players feel really satisfied with the bigger Mario. Next came the question of how to achieve this transformation from small to big. "What's the magical item we that we need?", they asked. The answer came in the form of a suspicious mushroom, which seemed like an item that would be understood by everyone. Being hit by a mushroom that made you grow was something that created a feeling of satisfaction and happiness.

The original enemy that would first face Mario in level one was Koopa Troopa, but the team thought that it might prove too difficult to jump on him, and then have to kick him as well. For this reason Goomba was created as the "bad mushroom". In the first drawings he was black and a programmer who saw it started saying "it's a chestnut, it's a chestnut!". The Japanese word for chestnut is "Kuri", which gave rise to Kuriboh, Goomba's name in Japanese.

To prepare the player for the b-dash, a hole was added that you needed to speed up for to be able to jump over. Holes surrounded by walls and a floor were added to the level, to make sure that there would be some safe places, even if the player fell.

The first level was designed for the purpose of getting the players to understand what they were doing in a natural way, and learning what the game was all about, before giving them more freedom in the open world. This design approach have been used on all the games made by the team, and is a key to success. Once players of a game understand what they need to do, it becomes their game, which makes it possible to start introducing surprises and build more interesting things upon them. 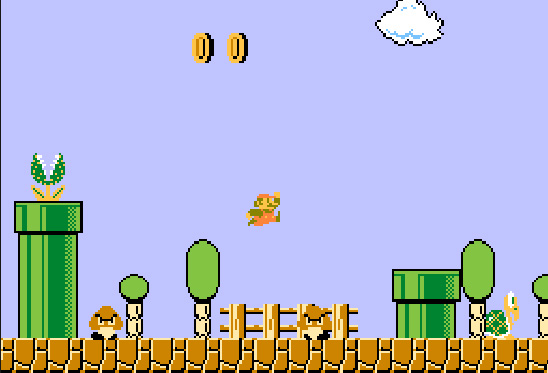 The fun courses of the games tend to be the later levels, and after they're constructed the designers can go back and create World 1-1. A lot of testing has to be done while the game is being constructed, which consists of observing how players will act without any instruction. This can yield some surprising results, with players enjoying parts of a game the development team didn't expect or playing differently. The feedback from players gets taken into consideration and leads to changes in the game, such as the Goomba character who was created late in the development of the first Super Mario Bros.

A lot of time has been spent on animating Mario in a way that feels good, and it's been an ongoing challenge with each new game released. Player feedback from Donkey Kong was taken into consideration when Mario's movement was developed. Miyamoto explains; "When Donkey Kong was first created, Jumpman had a very basic jump. If he fell from a height that was higher than he was, he would die, and we realised that this was very restrictive". For this reason, Mario could jump both higher and further, and with every new game created this concept has evolved.

They also received feedback about the slipping in Super Mario Bros, and that Mario never really stops. Just like the jumping, this has been adjusted little by little with every new version of Mario. The problem originally stems from the 2D format of the game, where the character is simply an image drawn on a flat surface, which means that as he's moving around and jumping he's being slid from place to place and you just can't feel the weight. This is key to believable animation and making a player connect emotionally with a character.

In 3D it gets even worse if your character doesn't have weight as he moves, so the 3D version of Mario actually stops for a fraction of a second when he lands after a jump to emphasize this. However coming to too much of an abrupt stop in an action game will create a bad feeling and break with the fluidity of the movement, so after he stops there's a little bit of slipping along the ground, rather than a harsh complete halt. Small details like this will make a big difference to how you experience the game, and therefore the weight is constantly tweaked with each new game.

Asked what the most memorable game they've created has been, Tezuka says Super Mario 3 without hesitating. It was his first time as a director, which brought new challenges, and had to juggle multiple roles when he was also creating the concept art and doing the drawing.

For Miyamoto the original Super Mario Bros has a special place in his heart, as it was the first project he worked on as a game designer. Super Mario 64 also stands out, as it was the first time Mario became 3D. This was challenging as it brought new camera movements and Mario had to act in 3D. Released in 1996, it was one of the early 3D platform games with open world playability. "During that time period, other people were using 3D technology, but mostly for things like F1 car racing and those kind of things", says Miyamoto.

Although creating and animating 3D characters was challenging, it was also a great opportunity, both in the case of Mario and Donkey Kong. It wasn't common back then to focus on animation as an integral part of video game development, as it was mostly technical people who were making video games, but this was starting to change. "Since then, I've realised the joy of doing something that hasn't been done before and working in the unknown" says Miyamoto and laughs. "Every discovery and learning is your own".

In a timely fashion, Nintendo's do-it-yourself Mario-level-making tool, Super Mario Maker, was released this Friday for the Wii U. The world of video gaming has come a long way since 1985.