The Future of Modeling in Film, TV and Games

In the "Future of Modeling" Andrew Caminish, Product Manager of Modeling Workflows for Maya at Autodesk, talks about where the industry is going in the area of modeling for film, TV and games. With a background as Lead Modeler at Weta Digital and one of the co-creators of Mudbox he knows his stuff.

Having grown up drawing he discovered CG through digital imaging and Photoshop, and became very impressed with what it enabled him to do as an artist. This was however not the experience he had with digital modeling. After initially thinking he'd done it all wrong and realising that he was actually doing it right, he sensed there had to be a better way. That led him to where he is today, trying to improve the industry.

In this video he talks about three overlapping stages in the evolution of modeling. The initial one started in 1972 when Ed Catmull and Fred Parke made the first digital models that appeared in a feature film. At this point modeling was about constructing wire frame. The method used by Ed Catmull was to create a plaster model of his own hand, and then tracing polygons, edges and vertices directly onto it. A measuring arm was used to plot the values that were fed to a computer through a teletype machine to construct the model. Fred Parke plotted polygons directly onto the face of his wife and used photogrammetric techniques to calculate the 3D coordinates.

The concept of modeling tools (that didn't yet exist) was that they would see a model the way a computer sees it, as a collection of edges and vertices. This gave the artist a low level of control, working on a low resolution surface adding each individual polygon in a similar way a bricklayer would create a wall. Modeling at this stage simply meant to construct the wireframe, and esthetic decisions were made before any technical considerations were made about the construction of a model.

This stage dominated in the industry for the next 30 years, until breakthroughs came in the early 2000's with work on films like Lord of the Rings. At this point the modeling process changed from using modeling tools that see the model the same way a computer sees it to tools that see the model the same way our eyes see it. That meant going from a collection of polys, vertices and edges to a full digital surface, and took the modeler from being a bricklayer to being a sculptor. Technologically this stage was enabled through more computer power allowing higher resolution, so that rather than crafting polys you were crafting a surface. 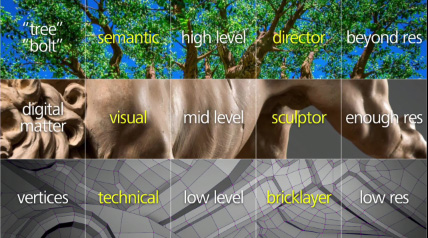 From here we are now moving to the third stage with modeling tools that see the model the way our brains see it. This means that instead of seeing a collection of vertices and edges, or a surface of digital matter, we'll envision the real thing such as a tree. Moving Mudbox sculpting tools into Maya 2016 is a step in this direction.

Research is happening on procedural assets and adaptive topology, which will prevent you from running out of polygons when sculpting and add resolution to the areas you're working on. With the sculpting happening inside of Maya itself tools that were before unavailable, such as joints and deformers, can now be used to shape the mesh. Adding lights and materials lets you work in context in a way which changes your perception and allows you to make better decisions about your models.

Another aspect of the future is automation. There are already algorithms today that can create topology that is good enough for some of the assets for film and games. This does not mean blindly surrendering control to the computer though. It is rather something that will allow modelers to focus on areas of greater value. An example of this collaboration with the computer already in use today is tree generators, which automate tedious tasks but still allows for a high level of control. We should expect to see more of this procedural approach to modeling in the future.

On a final note there are huge possibilities in machine learning coupled with big data. This is something that might in the future be able to synthesize new models based on recombining from a library of pre-existing ones.

Page One The Future of Modeling in Film, TV and Games