Creators want to make more art faster and clients want to make last minute changes. Can procedural content creation help with this? The brains behind the Max Creation Graph (MCG), a node-based scripting environment introduced to 3DS Max 2016, think that it can, by offering an artist-friendly procedural workflow and portable procedural assets.

Through MCG it becomes possible for users to create procedural tools using a visual node-based environment without any coding. It is still a complex system, but it lowers the bar of entry for technical artists. The core vision is to bring a procedural workflow to more artists, who much prefer live updates in the viewport to functions, array and tables, and not have them rely on technical artists all the time. 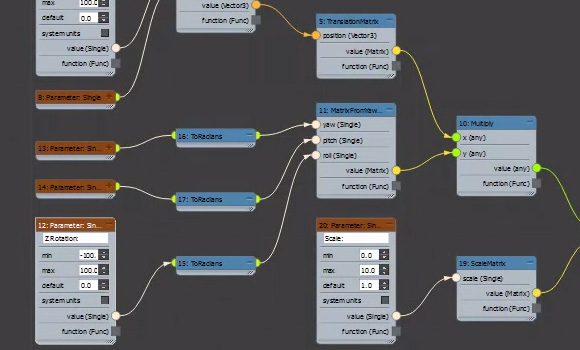 So how does this work? In a procedural workflow it becomes possible to revisit decisions you made earlier during the art creation process without having to manually re-apply the later steps. Data, such as mesh topology or vertex color, can drive effects on other parts of a mesh so that when changes are made they automatically propagate down the chain. A very simple example of this would be to have the topology of a terrain mesh drive the placement of objects, such as telephone poles, where any changes made to the terrain would automatically update the placement of the objects connected with it.

This type of workflow is becoming more attractive as projects are getting larger and more complex with more and more assets, and simply scaling up the number of artists doesn't work well. Some of the game studios now have teams with more than 1000 artists, which becomes a nightmare to manage. Clients often demand changes later and want a so called "art lock" to be pushed further down the line. A procedural system would allow for more flexibility on a production, making it possible for changes to happen later in development, and speed things up by automating tedious work that would otherwise have to be done manually.

The caveats to this is that it has a longer setup time and requires technical expertise, so you have to be able to find the right people. Another problem is that certain artistic visions are not always simple to convert to a procedural workflow, and breaking the procedural pipeline can be quite easy. Some typical object modifications could break the dependency in the data, so that when source data was updated the changes wouldn't necessarily propagate down the chain.

At the moment it's possible to create procedural tools for geometric primitives, modifiers, certain utilities and animation controllers in the Max Creation Graph, but the development team believes that somewhere in the future lies a procedural uber-tool that will be able to make geometry, materials, effects and animation that adapt and respond to other scene elements and parameters. In addition they envision that procedural assets or so called smart assets, could replace the static meshes available for sale these days in marketplaces like Turbosquid.

A smart asset would be responsive and capable of changing style. If you compare it to a model you can buy at present, such as a desk, which can be scaled or slightly altered to change the number of drawers, handles and other details, a procedural desk would be able to completely change style and convert from a hypermodern design to Victorian without breaking. With time this could be expanded to not include just the geometry, but propagate down to have the UV coordinates and textures change with it as well.

In order for people to start trading in smart assets they would need to be able to run in multiple 3D software packages such as Maya and 3DS Max, and as people would use different platforms during the creation process portability would be important, just like you need compatible file formats such as .fbx and .obj for asset transfers today.

Although this development is still a bit away on the horizon, the concept is very interesting. For more on this subject check out the video presentation below, which is just under 15 minutes long and followed by a Q & A session.

Page One The Future of Procedural Content Creation in 3D