How did Autodesk Maya become so popular?

With the final version of Softimage released this month, Autodesk closes the door on one of the oldest 3D applications on the market. Softimage changed hands many times, the company was first founded by filmmaker Daniel Langlois in 1986 in Montreal and then sold to Microsoft in the 1990's before it was passed on to Avid Technologies - its' final owner until Autodesk announced the aquisition in late 2008 in a deal worth $35 million.

This leaves the company with Maya and 3DS Max as the main applications in the Media and Entertainment section, none of which should be expected to disappear any time soon. 3DS Max has been part of Autodesk since the early days of the company, created by the Yost Group and published by Autodesk since the original 1990's version which was simply called 3D Studio. 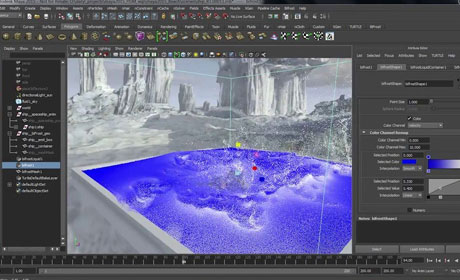 3D Studio was one of the first affordable and integrated modeling, rendering and animation systems for the PC, it was released at the unprecedented price of US$3,495 and has remained there ever since. Although you sometimes come across people complaining online about outrageous software pricing, the price of both hardware of software has in fact come down significantly in recent years. Back in the late 1980's the price tag for software from Alias|Wavefront and the likes, along with the Silicon Graphics Iris workstation required to run it would come at a price tag upwards of US$40,000- 50,000 (adjusted for inflation this would equate to approximately US$85,000 - 105,000 in modern prices). In other words software was definitely more unaffordable to individuals and smaller studios back in the day.

The original development team working on 3D Studio was tiny with just four people - two engineers, a designer and a tech writer - and at times they would put in 110-120 hours of work per week to get the job done.

At Siggraph in 1995 Autodesk announced 3D Studio Max for Windows which also introduced the concept undo to 3D packages, something previously unheard of. This was also the year when Pixar released Toy Story, the first 3D animated feature, and Silicon Graphics (SG) purchased Alias and Wavefront and combined them into Alias|Wavefront. The merger, which would lead to the creation of Maya a few years later, happened in response to Microsoft's recent acquisition of Softimage which was seen as a threat to SG's market dominance in selling expensive workstations for use with computer graphics software. SG were already in a partnership with Alias as their hardware provider, selling a workstation every time Alias sold software. In turn Alias, which was founded in Toronto in 1983 by four people with the goal to produce a user-friendly animation program, had taken its' name from the only paying gig the company had at the time - writing anti-aliasing programs for SG users.

By the early 1990's, a time when a lot of things were happening in the world of computer graphics, Alias already had a good reputation in the entertainment industry, at first through its' modeling software Alias, which was one of the earliest program to use NURBS, and later through PowerAnimator. This was closely linked to the use of Alias software by Industrial Light and Magic (ILM), which received a lot of publicity in 1989 when they won the Academy Award for Best Visual Effects with The Abyss. This gave Alias software high-profile recognition for the first time in movie animation, when the pseudopod creature in the film (which was seen as one of the most technologically advanced at the time) was made with Alias NURBS rather than the standard polygons.

The following year Alias released PowerAnimator and ILM again won the Academy Award for Best Visual Effects with Terminator 2: Judgement Day. PowerAnimator was used in the film to create Arnold Schwarzenegger's main enemy, the chromium killer cyborg. While Schwarzenegger earned $12 million for his role in the film he was still not the highest paid actor, as the liquid metal mans' salary worked out to about $460,000 per minute (compared to just the $200,000 per minute for Schwarzenegger).

From here PowerAnimator was used on numerous Hollywood blockbusters and in 1993 ILM again won Academy Awards for the effects in Jurassic Park, which remains one of the most important films for the development of computer graphics and its use in film. In addition to the giant animatronic dinosaurs created for the film (Stan Winston Studios T-Rex was 12 meters long and weighed almost eight tons), the first computer animated dinosaurs ever hit the screen and for this PowerAnimator was used.

Jurassic Park had a marketing budget of US$65 million and deals were in place with more than 100 companies to market 1,000 products, including video games, toy lines and McDonald's dinosaur-themed meals,so the media coverage was huge with the tagline "An adventure 65 million years in the making".

With the success of this film new companies such as Digital Domain were starting up and the VFX industry was being built. At this point Alias had all the important film companies with Disney, Pixar, Sony Pictures Imageworks and Cinesite on their client list. This is also when the development of Maya first got started at Alias.

Meanwhile Wavefront, which was set up in California in 1984 and just like Alias intent on producing graphics software, had reached out internationally and was better placed to reach the overseas markets. An early investor in the company was the government of Belgium and offices in Brussels were opened, they also aquired the French company Thomson Digital Images who held innovative animation technology that went into the core architecture of Maya after the merger, as well as allowed expansion into Asian and European markets.

When Maya was released in 1998 as the new flagship product of Alias|Wavefront it was the culmination of three 3D software lines: Wavefronts' Advanced Visualizer, Thomson Digital Images' Explore and Alias' Power Animator, with the development having started at Alias already in 1993. Maya, which is a concept in Hindu philosophy and roughly translates from Sanskrit to mean "illusion", quickly became the film industry standard as it was already well placed in the market, taking over from PowerAnimator which was cancelled shortly after the release of Maya. Alias|Wavefront clients were switching over to the new platform, which was already in use at many VFX houses before the official release. Some of the companies on the list of beta testers were Cinesite, Square, Blue Sky Studios and Rhonda Graphics.

Just like Jurassic Park had been important in establishing the use of computer graphics for special effects, another movie also including dinosaurs was crucial for the development of Maya. This was Disney's Dinosaur, which when it came out in 2000 was the most expensive film of the year at a production budget of US$127,5 million. It also made extensive use of CG dinosaurs which were composited on to dramatic live action backgrounds filmed at scenic locations around the Americas. Disney worked closely with Alias on the development of Maya during the production of the film, requesting a customizable User Interface, which was a particular influence on Maya's open architecture, something that's partially responsible for why the program has become so popular in the industry.

Maya continued to be used by ILM on the new Star Wars prequel and also received a big push in 2001, the year mental ray support for Maya came and the world's first "photorealistic" film came out with Final Fantasy: The Spirits Within from Square which used Maya to create the 23 person digital cast. 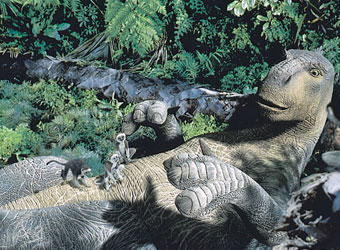 In the beginning (from v2) Maya came in two versions; the cheaper Maya Complete for modeling, animation and rendering and Maya Unlimited which was aimed at the high-end production houses including effects such as cloth, and fur plus some more advanced modeling tools. Initially these were priced high with Maya Unlimited at US$16,000 and Complete at US$7,500 (this was later reduced with a massive price drop to US$6,999 and 1,999 respectively).

Another milestone in Maya's development came with the addition of a realistic fluid simulator in version 4.5, which could be used to simulate smoke, clouds, fire and explosions, followed by mental ray integration in version 5 and a significant price drop down to US$6,999/1,999 for Maya Unlimited and Complete respectively.

Dynamics is one of Maya's core strenghts, and Alias continued to build on this with the introduction of the nucleus solver(n) and nCloth in version 8.5, replacing the more cumbersome cloth. The nucleus solver is the common solver for Maya allowing different effects to interact which wouldn't be possible with independent solvers, and the nDynamics system has been expanded on since with the addition of nParticles and nHair.

Maya 8.5 was the last version put out by Alias before the company was aquired by Autodesk in early 2006 for US$197 million. When the next version was released it was as Maya 2008 rather than version 9, thus streamlining the naming convention for development cycles with other Autodesk programs such as 3DS Max. With Maya 2010 the two main versions of Maya Complete and Maya Unlimited were dropped and combined into one package that went on sale for US$3,495.

In 2008 the team that developed Maya's fluid effects system were given an Academy Award for technical achievement, the third the software itself has been awarded so far. In addition it has been used to create the award winning effects on every movie for the past 15 years. With Maya 2015 Autodesk has announced a new fluids solver to be added called Bifrost. This is the solver from Naiad, a fluid simulator that was aquired by Autodesk in 2012 along with its development team, that are now responsible for integrating the technology and bringing it to Maya users.

Page One How did Autodesk Maya become so popular?