Transforming is a unique exhibition that's on this month at the Fine Art Society in London, where MPC has worked together with the artists Rob and Nick Carter to make audiences re-engage with the old masters. On display are six groundbreaking artworks, four animated digital paintings that come to life before the viewers eyes, and two bronze sculptures created through a complex 3D modeling and printing process.

The exhibition is branching into a new genre in the world of art with the focus around the piece "Transforming Still Life Painting", which is an animated time-lapse sequence running over a three hour period. Created last year it is the first digital still life ever produced in this way, based on an original painting from 1618 by Dutch painter Ambrosius Bosschaert the Elder. 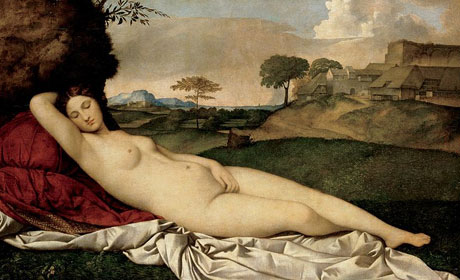 "From creating the most complicated bronze in the world, to an intense study of anatomical decomposition, the pieces are a result of meticulous research, thousands of hours of work and a fantastic artistic collaboration", said Jake Mengers, Creative Director at MPC.

Tasked with creating a 24 hour cycle in the life of a flower bouquet, thousands of hours of nature footage and time lapses of the flowers in the original painting were studied. Every single component had to be modeled and rigged before animation, the textures were projected straight onto the polygonal mesh from the camera as the piece is seen from a single perspective.

When the flowers didn't move in the original painting, they had to be removed from the digital replica one by one and the space behind them painted in with new background created by the team at MPC. The time lapse style of the flowers opening and closing was animated in Maya and the animation was then extrapolated into a longer time frame, keeping all the detail of the tiny movement but over a more realistic time frame.

Once the flower animation was complete little animals such as snails and caterpillars eating leaves, as well as flies, ladybirds and butterflies were added to the composition. In total 45 minutes of creature animation was integrated into the three hour piece, all creatures were heavily researched through books and video footage to be made as realistic as possible before being individually modeled, rigged, animated and integrated into the painting, with the textures done in a style that fitted with the painting.

Even the water in the vase was animated, and subtle effects such as little dew drops at dawn and mist in the background landscape were added. The final piece took longer than a full animated feature film to render.

The oldest painting to be animated is Venetian renaissance painter Giorgione's "Sleeping Venus" from 1510 as the "Transforming Nude Painting", a 140 minute long time lapse where live-action is blended with digitally generated imagery. In the painting Venus sleeps through the day as it passes to night with the landscape transforming in the background.

The entire surrounding environment for the new piece was then re-created as a 3D model and textured by projecting the painting, with all shadows removed, onto the model. The grass was made with fur software and a feather system was applied to the trees, both these elements were then animated to appear to move with the breeze.

To create the realistic skies Vue was used, these images were also used to light up the landscape. Recreating the sun's path across the sky enabled the team to have changing shadows within the environment that were in line with the light source. Between the changing lighting, moving clouds and movement in the trees and grass, the background in the artwork is never static but in constant change.

To stay true to the size of the original piece, while enduring close-up viewing scrutiny, the team had to use the newly developed Ultra HD Technology at a massive 4K. This had a huge impact on MPC's render farm and storage availability, as 4K meant working at four times TV standard.

"Transforming Vanitas Painting" , which is based on "Dead Frog with Flies" from 1630 by Ambrosius Bosschaert the Younger, starts with the last minutes of the frog's life and then extends through the different stages of decay. It required extrapolating the story behind the artwork, before flies and maggots were introduced, that had to behave believable with the ability to avoid each other and be attracted to the areas of the skin that was the most decomposed. 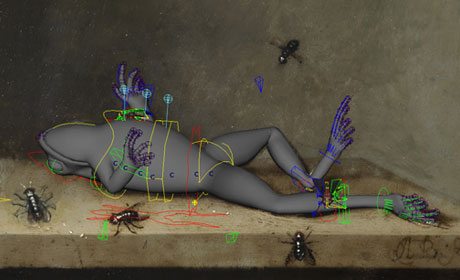 At first decomposing footage of various animals found on the internet was studied, before concept artists created a set of stills for the different stages of decomposition that the film would go through. This gave the team an idea of how long they'd have to spend on each individual stage before the skin broke and the maggots came into the scene.

The skin decay was done mainly through displacement maps, here ZBrush was used to create various skin shapes that were then animated between through hiding, shrinking and displacing geometry until it finally decayed into nothing but bones. One of the main challenges was to keep the loosely painted style which is present in the original still life throughout the animated piece. 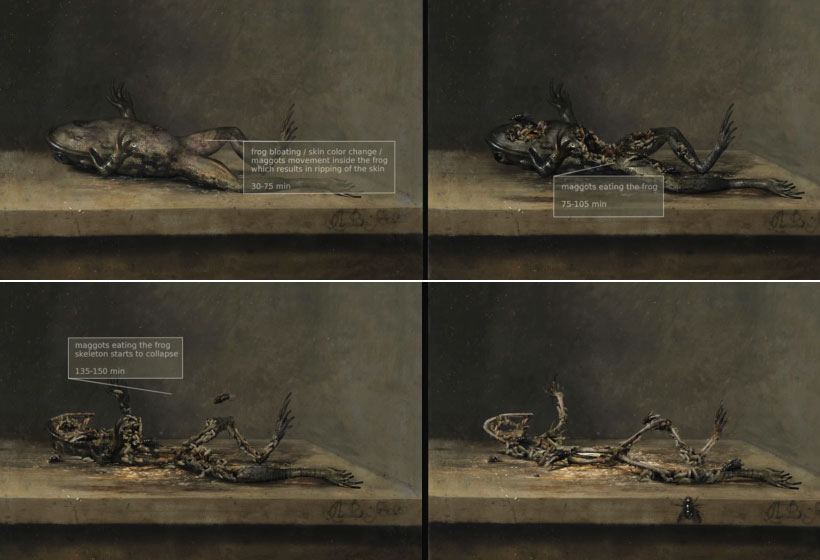 In addition to another animated canvas two bronze sculptures of flowers were created, one of these is "Sunflowers" based on the famous painting by Vincent van Gogh from 1888, which was modeled in Maya and Zbrush before being 3D printed â€“ claiming the title of the first use of 3D printing in fine arts.

For this the MPC team began by creating a base mesh, the first step in understanding the painting's volume. The key was to have balance from all angles and keep the composition itself attractive, before resolution could be added to create an incredibly high level of detail. In creating the sculpture, MPC replicated Van Gogh's artistic process by starting with a base layer, equivalent to a wash of color, before thicker strokes were applied. Actual strokes from the original painting were recreated in the 3D sculpted piece using ZBrush.

The printing process was done using a variety of methods and printers, until finally printed to a resin material using a high-end Projet 3500, which prints to a tolerance of 16 Microns. The bronze sculpture was then cast with the original brush strokes and signature of Vincent Van Gogh.

More than three years in the making, the artwork will remain on display at Apple Mac screens and iPads until 2nd of November. According to Rob Carter it was all about bringing paintings to life, something he hoped would extend the six seconds an average museum visitor spends on a piece, according to a statistic he read.

"Our work has always been interested in fusing the analogue and digital" he says. "Several years ago, people were worried about art work with a plug. But now people are embracing technology like never before".