55 Years of Belgian Blues - A History of The Smurfs

One of the most important contributions to popular culture from the tiny nation of Belgium is the Franco-Belgian comics, known under the name of bandes dessinÃ©es - which in English translates to "drawn strips", where the Smurfs as well as the characters from recent feature films Tintin and Asterix originated.

The man who introduced the Smurfs was Charles Depuis, a pioneering Belgian publisher of French-language comics, who gave out the first issue of "Le Journal de Spirou" in 1938 in response to "'Le Journal de Mickey" published four years earlier. His father Jean Depuis, the founder of publishing house Depuis, felt that Belgium needed something to compete with the cultural imperialism of the American Disney character Mickey Mouse and thus Spirou was born. 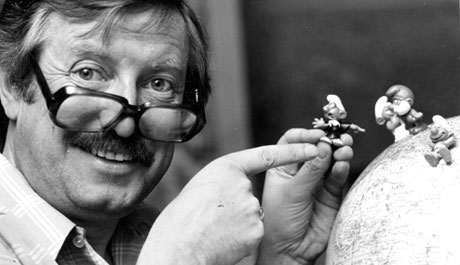 In the beginning the French-language magazine contained a mixture of the American superhero comics popular at the time and new creations, this led to some difficulties during World War II when Belgium was occupied by the Nazis and American comics got banned from being published â€“ however Spirou quickly recovered in the post-war era and became one of two leading European comic magazines, with Tintin being the other one.

Dupuis went into a period of rapid growth as comics became more popular in the late 1940's and 50's and in 1958 the Smurfs made their first appearance in Spirou magazine, as part of the comic "Johan and Peewit"'. The creator Pierre Culliford, who used the pen-name "Peyo"', was a graduate of The Royal Academy of Fine Arts in Brussels who'd been working at Spirou since 1952.

The Smurfs, who quickly gained popularity, got their own strip a year after their debut and at the same time Dupuis went into merchandising with plastic PVC collectible Smurf figurines. These became widely distributed in the 1970's when garages in the UK and several other countries started giving them away as a promotion when petrol was purchased â€“ the demand was so high that manufacturers got them made in Hong Kong at one point which caused a led-paint scare as led limits in Asia weren't as high as in Europe, however no children were reported poisoned by the PVC smurfs.

Peyo started his own animation studio in the 1960's and with time he became less involved with comic creation and took on more of a supervising role. In 1965 the first animated feature called "The Adventures of the Smurfs" was released in Belgium â€“ a collection of five black and white shorts that had been made for Walloon TV.

During this period Dupuis started to publish comic albums collecting the strips published in Spirou â€“ the first Smurf album came in 1963 under the name "The Black Smurfs" and told the story of a Smurf that got bit by an insect which spread a virulent disease that turned its victim into a mad black creature that jumped around shouting "GNAP" and tried to bite as many other other Smurfs as possible to spread the plague. 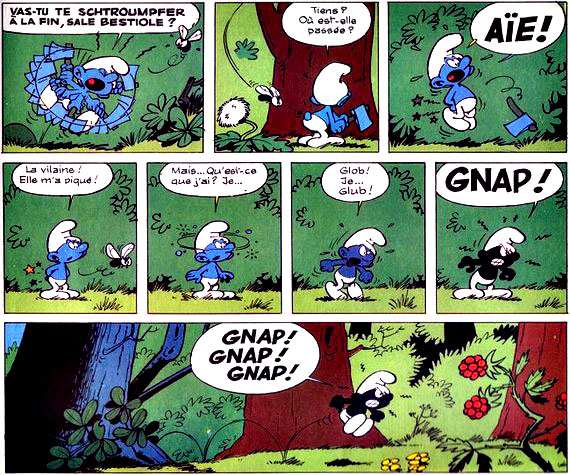 Whilst a cure was invented against the virus and others who got infected later returned to normal this Smurf never did and became the Grouchy Smurf whose catchphrase in response to everything is "I hate...".

In the U.S. Translation the album title was changed to "The Purple Smurfs" and the Smurfs were considered a racist comic by many â€“ what's important to note here is that "The Black Smurfs" came at a time when colonial empires were falling and just three years earlier Belgian Congo had gained independence to form what became the Democratic Republic of Congo, after years of brutal rule under Belgian kings where millions of African people had been killed.

According to Peyo the Smurf characters were inspired by the trolls of Nordic folklore, in these fairy tales trolls are usually stupid and slow to act. They also talk of a female forest woman called a huldra who is a dangerous seductress who lures men into the forest and sucks the life out of them.

When he described the behavior of Smurfette - the single female character â€“ he said; "She's seductive, uses trickery rather than force to get results" so perhaps she was created with the Scandinavian mythical creatures in mind.

An important collection of old Nordic folklore is 'Amongst Gnomes and Trolls' that started in Sweden in 1907 as an annual publication and is famous for its amazing illustrations. From the many artists that have worked on it the most well-known is perhaps John Bauer who inspired several successful illustrators of children's books that came after him in the 20th century. 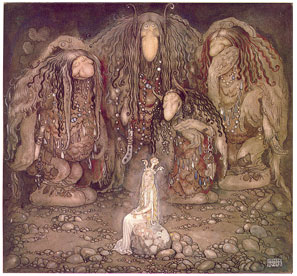 In 1976 the animated feature "The Smurfs and the Magic Flute" was released in the Netherlands, Belgium and France which was caught by media-entrepreneur Stuart R. Ross â€“ the man who brought the Smurfs to the U.S. by selling the rights to the American market. The Smurfs then became an animated show by Hanna-Barbera in the years 1981-89 with Peyo on board as the story supervisor. It aired as a Saturday morning cartoon on NBC and led to a Smurf fad sweeping across the nation, the Belgian animated feature was translated to English in 1983 and became the highest grossing non-Disney release in American cinemas.

This also created a huge boost for the Smurfs merchandise, during the 1980's marketing executives were aggressively targeting children with ads and the memorable blue Smurfs were the perfect candidates for product branding. Smurf music covering everything from annoying jingles to ear-numbing techno combined with comics and figurines to promote various processed foods. One campaign that stood out was the Smurfberry Crunch Cereal from 1982 that came with blue smurfberries â€“ surprisingly the food dye used to color them made the feces of children who ate it turn a shady blue, hence it was quickly removed from the shelves.

In 2005 another memorable advertising campaign involving Smurfs was created for UNICEF, with the aim to raise money to rehabilitate child soldiers in former colonies Burundi and the Democratic Republic of Kongo. The ads were shown late at night on Belgian TV to prevent children from being traumatized as Smurf village was completely annihilated by bombs dropped from warplanes, ending with a crying Baby Smurf surrounded by corpses.

The smurf fad, with the Hanna-Barbera series described as 'kiddie-cocaine' for the people growing up in the 1980's, slowed down in the 90's after the show was canceled although re-runs were still being shown on the U.S. Networks. Another reason for the quiet 90's would have been that Peyo, the driving force behind the little blue creatures, died of a heart attack on Christmas Eve in 1992.

For the 50th anniversary in 2008 Belgium had a special commemorative five Euro coin created - at this point the Smurfs merchandise had made more than US $5 billion since its conception. This is also the year when the film rights were obtained by Sony Pictures Animation and Universal which led to a Smurf-renaissance in 2011 when the first film in the trilogy hit the cinemas.

Combining live-action with CG animation has allowed the Smurfs to leave their world and join ours, first arriving in New York and now Paris in the sequel. These high-budget 3D films are rich in visual effects to make what's fake and real blend smoothly, three specially trained cats were used on set to help make the digital Azrael as real as possible. The actual cat performance was then match-moved to allow for face replacement with an animated performance where the digital version could show emotion that would not be present in a real cat.