May the fourth be with you

Industrial Light and Magic (ILM) was first set up to provide the effects when Lucasfilm started to work on the original Star Wars trilogy in 1975, and has since provided the VFX for more than 300 films. It followed the huge success of 2001: A Space Odyssey, where audiences experienced real space through NASA footage and amazing special effects for the first time. In order for Star Wars to succeed it needed to provide twice as many effects shots in less than a third of the time and the budget, and as no facility existed at the time to handle that kind of project, George Lucas set up ILM in an empty warehouse near Van Nuys airport on the outskirts of LA in California. The exact location was kept secret to keep away the souvenir collectors who'd otherwise have been there digging through the garbage cans.

The job of getting the facility up and running was initially offered to special effects legend Douglas Trumbull who'd been responsible for 2001: A Space Odyssey, but as he turned it down the project was passed on to his protegee John Dykstra. Dykstra, who soon became the father of modern motion control, had spent time working at the Institite of Regional and Urban Development in Berkeley where they sought to simulate urban traffic patterns on a minuature scale. In order to do this a large model of Marin County in California had been created, equipped with a camera with a snorkel lens that moved through the streets to simulate the view point of a car. These moves were then programmed into a computer which operated motors on a camera motion rig, a tedious process as the system could only move very slowly being limited by the computing power available at the time.

However this cityscape came to create the next leap in motion controlled photography as the technology was used to build a system of robot cameras equipped with computer memory to capture the Star Wars space battles envisioned in the storyboards at ILM.

In addition to creating cutting edge effects on the fly many old techniques were combined with new ones by ILM on the original Star Wars trilogy. An obsolete film format from the early 1950's was resurrected, by shooting the models with VistaVision cameras that offered extremely high image resolution the team could minimize any grain build up through the many stages of compositing. This first digital motion control camera system which allowed for seven axis of motion was dubbed the Dykstraflex after its creator and got rewarded with an Academy Award in 1978.

For the simpler shots the ancient methods of the Japanese Bunraku puppet theather were copied, where you had animators dressed in black moving across blacked out stages with miniature space puppets on sticks and strings. As experience built up more outrageous moves and compositions were tried on later films, once the means for production had been established.

After Return of the Jedi was released it took 16 years before Star Wars returned with Episode I: The Phantom Menace in 1999. Although Lucas had started the research into CGI already in 1979 when he hired Ed Catmull to create the Graphics Group at Lucasfilm, it was not until the mid 1990's that he felt the field had reached the level he wanted to continue on the prequels.

When the Senior VFX team went out to the Skywalker ranch for the initial production meetings they were met by Lucas and a staggering amount of 3500 storyboards pasted up on sheets of foamcore. It was unlike any other special effects movie ever done, an effects heavy film at the time had 250 shots and Titanic had been an epic undertaking at close to 500 shots. Lucas was thinking about something closer to 2000 shots.

ILM had more freedom than they ever had on the original Star Wars trilogy due to newly developed digital technology and as Lucas said at this point;

The fun part about writing this project was that I wasn't limited, whatever my imagination could come up with I just put down on the page and then said we'll worry about this later.

Whereas before filmmakers had been restricted by physical boundaries - you couldn't make something that big or create such an epic landscape as the setting for your story - anything was now becoming possible.

The film was a massive undertaking. Three VFX supervisors led separate teams, one focused on podrace and space battle sequences, one on lightsaber effects and the final one on the underwater sequence and ground battle. In addition to this there were several teams set up for character animation and miniature effects.

However the CG that was meant to take the world by storm was met with mixed responses amongst the audiences. Perhaps the most negative reaction was that to Jar Jar Binks who was being touted as "the first walking and talking CG film star", with the role played by actor Ahmed Best. In addition to providing the voice he was filmed on the set interacting with other actors while wearing a Jar Jar suit and mask, his performance was motion captured and then transferred over to the digital version which was seen in the film. This technology has continued to develop and become more popular in recent years with Andy Serkins roles as Gollum in The Lord of the Rings and Caesar in Planet of the Apes. 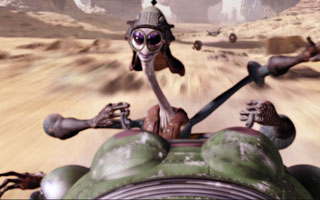 The famous podracer sequence had an all digital cast and digital ships, this was some of the most memorable VFX ever created and a triumph to CG, but although the digital characters were being used extensively some of the classic models stayed the same. This was the case with R2-D2, who was played by the English actor Kenny Baker.

In the original Star Wars film only two versions of the model existed, one was remote controlled and rolled on wheels and the other was worn by the actor who walked on two legs, but as problems with the remote controlled version had occurred a total of nine R2-D2 models were created for the new film. As before, there was one for the actor to wear and one pneumatic R2-D2 built in Britain that could shift from two to three legs. The latter version was used mostly while filming Tatooine scenes in the Tunisian desert, as it had a motor system that allowed it to drive over sand. ILM built another seven models containing wheelchair motors capable of pushing almost 200 kg of weight. 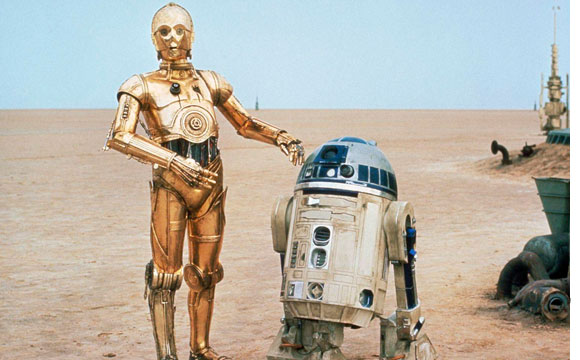 Page One May the fourth be with you